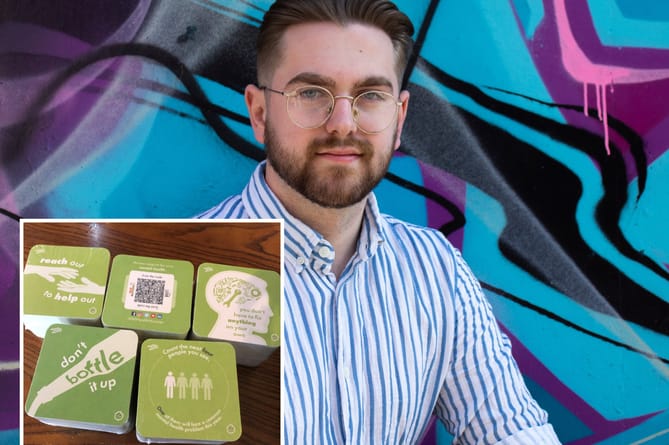 Mental Health Monster CIC have distributed 10,000 beer mats, featuring tailored messages and a QR code to anonymously direct people to mental health support organisations in Ceredigion and beyond, to 14 pubs across the county.

The campaign, which is sponsored by MW Scaffolding and LEB Constructions, aims to reduce the stigma that typically prevents men from seeking mental health support, especially men in industrial occupations, such as scaffolding, plumbing, construction and more. It will run from mid May until mid June.

Nathan Jackson, Managing Director of Mental Health Monster CIC and the leader of this project, said “These types of projects really excite me because they represent a chance to have a direct impact on people. I’d urge everyone that sees it to share it, because you never know who may need the information.

“Expect more of this targeted approach from us and look forward to seeing us in the places that traditional mental health campaigns may not go.”

According to research, 55 percent of UK construction workers will have a mental health problem in their lifetime. But Nathan said, generally, these individuals are less likely to seek support for a number of reasons. One being that traditionally masculine stereotypes promote the idea of male independence and that men should deal with their issues alone.

Luke Baker of LEB Construction said: “We are delighted to have been able to partner with Mental Health Monster to raise awareness of mental health and their latest campaign to increase awareness within the trades is something we wanted to support.

“LEB Construction have a trained Mental Health First Aider in the company and make the well-being of our people a priority.

“On a personal level I lost one of my closest mates last Christmas to his struggles with poor mental health, so this is very important to me.”

Kevin Roberts of MW Scaffolding added: “We’re excited to be on board with this project. We know the effect that poor mental health can have on the people in our industries and we’re grateful for the chance to share the message that help is out there.”