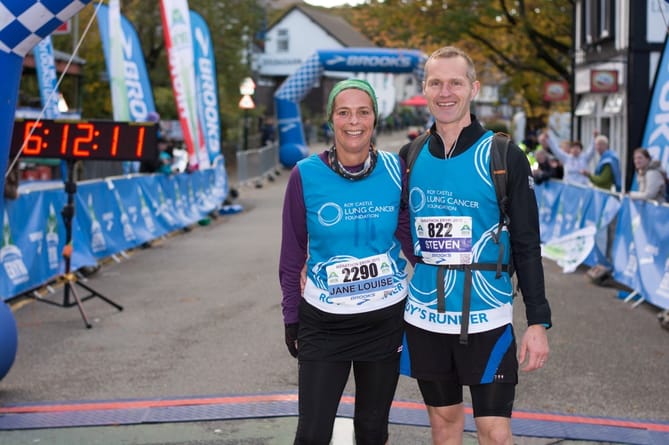 A Ffarmers local living with lung cancer, “who inspires everyone she meets”, is completing a half Ironman this summer to raise awareness and funds to fight the disease.

In June 2014, 43-year-old Jane Holmes, who was “asymptomatic, a keen marathon runner, living a healthy lifestyle”, was diagnosed with advanced lung cancer.

Despite being given a poor prognosis, after chemotherapy, two surgeries and two courses of radiotherapy, Jane is still fit and healthy, and has now decided to take on the Swansea inaugural Ironman 70.3 - a half Ironman.

Jane said: “This time eight years ago I went for a chest X-ray that led to a diagnosis of advanced lung cancer. I was 43 years old, didn’t smoke and was a regular runner.

“I was given a poor prognosis, incurable, inoperable and terminal. I have had chemotherapy, two surgeries and two courses of radiotherapy since then.

“Last year I started The Body Coach to keep me toned up. I have now become a bit mad and have signed up for an event that will truly challenge me this year, a half Ironman. This involves a 1.2mile swim, 56 mile hilly bike ride followed by a 13.1 mile run.

“The cut off time is 8.5 hours, I think, and my goal is to come in within that! It is taking place in Swansea in August. I didn’t even own a bike when I signed up.

“I have less lung than I did eight years ago but looking back to conversations we were having with clinicians around that time, I never thought I would be entering a half Ironman eight years later!

“Over the years I have raised over £25,000 for Roy Castle Lung Cancer Foundation and will be doing the half Ironman to hopefully raise a bit more.”

In 2015, Jane was told she didn’t follow the “typical NHS pathway for advanced lung cancer”, and after chemotherapy and radiotherapy, Jane was recommended for surgery to remove part of the lung that contained the tumour.

Despite having a “little less lung”, just four months later she was running the Snowdonia marathon. In the same year, she was also awarded the Inspiration Award by the Roy Castle Lung Cancer Foundation.

Two years later, Jane underwent further surgery after the return of some tumour cells, “which led to more marathons being completed”. That year, 2017, she was recognised by the Snowdonia marathon team with an Inspiration Award.

Jane’s husband, Stephen Holmes, has been her number one cheerleader: “After a couple of years of lockdown as well as clear scans, Jane has found a new goal - the inaugural Swansea 70.3 half Ironman event in August this year.

“Supported by her local running and cycling club, the local community, the Roy Castle Lung Cancer Foundation and by me (of course!), she is taking on the challenge, fully committed.

“As Roy Castle used to say “Dedication is what you need” - she has this and more.”

To donate to Jane’s fundraising effort, go to https://www.justgiving.com/fundraising/janeholmes-rclcf.