Eight people conned by courier fraudsters in the last week 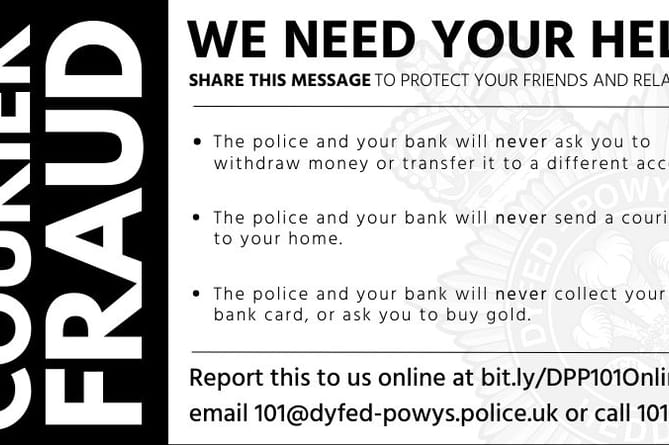 EIGHT people in mid Wales have been conned out of £58,000 in the last week alone as police officers say they are investigating a spike in ‘courier fraud’ cases

Dyfed-Powys Police says it is investigating a growing number of reports of people posing as bank staff or police officers, as eight people have lost £58,000 between them to criminals in the last week alone due to ‘Courier Fraud’.

DC Gareth Jordan from the Economic Crime Team said: “People posing as fake bank staff or police officers have been calling residents and persuading them their accounts have been compromised, then sending a courier to collect the money. This is known as Courier Fraud. In the past week alone we have seen eight people lose a significant amount of money between them, and it’s very distressing for those victims. We are asking friends and family to look out for those that could be vulnerable – talk to them about this scam, advise them to be vigilant, and report any suspicious calls. Please remember that police, or your bank, will never ask you to withdraw money or transfer it to a ‘safe’ account.”

If someone claiming to be a police officer asks you to withdraw money for safe keeping or that they’re investigating the bank staff, it’s a scam.

And the police will never send someone to your home to collect money, nor will they ask you to transfer funds out of your account.

Stop: Always take a moment to think before parting with your money or information - it could keep you safe. Challenge: Could it be fake? It’s ok to reject, refuse or ignore any requests. Only criminals will try to rush or panic you. Protect: Contact your bank immediately if you think you’ve fallen victim to a scam and report it to the police. Report suspicious emails to: [email protected]You can also report suspicious texts by forwarding the original message to 7726, which spells SPAM on your keypad.

Anyone who receives a similar call is asked to contact Dyfed-Powys Police either online: bit.ly/DPPContactOnline; by emailing: [email protected] or calling: 101

Anyone who thinks they have fallen victim to a scammer should report it by calling 101, or Action Fraud on 0300 123 2040. For further advice and information on how to avoid being scammed visit www.actionfraud.police.uk.

Always ring 999 if you feel there is an immediate threat to your safety.