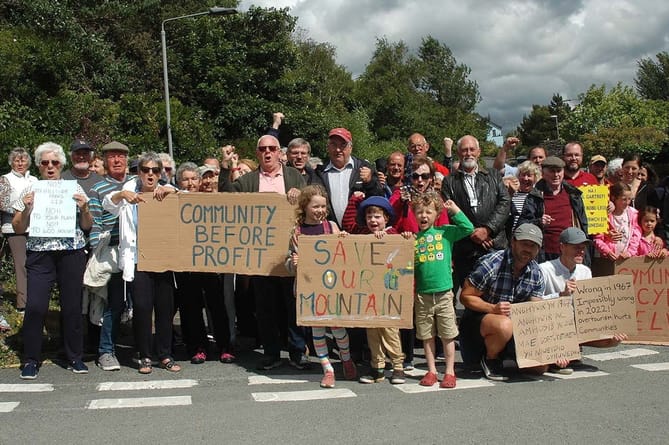 Residents and councillors at the entrance to Aberdyfi Hillside Park protest against the appeal to the Supreme Court to build over 400 houses on the hill above the village Photo: Doris O’Keefe ()

THE Supreme Court will settle a decades-long dispute over the building of 401 houses in Snowdonia National Park at Aberdyfi.

The then Merioneth County Council granted planning permission for the houses on Balkan Hill in 1967.

Gwynedd Council became the relevant local planning authority in 1974. In 1987, it argued in the High Court that the 1967 permission had lapsed. The court rejected that, deciding the development could still lawfully be completed.

Snowdonia National Park Authority became the relevant local planning authority in 1996. In 2019, Hillside Parks Ltd, which now owns the site, brought a claim against Snowdonia to ascertain whether the development could still lawfully be completed. The authority argued it could not and the High Court and Court of Appeal agreed, but now the case will be heard in the Supreme Court next Monday.

Catrin O’Neill said: “It would be an absolute disaster if this goes ahead. It is going to trash our village. We don’t have the infrastructure, such as roads and sewage pipes, for this. There are barely 400 homes in Aberdyfi now. If it goes ahead it could take decades to build these houses. It’s going to make our lives hell.”

Around 50 people protested at Hillside Park on Saturday, some carrying placards saying ‘Community before profit’, ‘Save our mountain’ and ‘Wrong in 1967, impossibly wrong in 2022. Over-tourism hurts communities’.

MS Mabon ap Gwynfor and MP Liz Saville Roberts said “there is absolutely no demand for 401 executive homes in Aberdyfi, simply to line the pockets of greedy developers” adding the “over-development would bring no benefit whatsoever to the local community, in fact, it would detrimentally change the character of the village.”

Hillside said some houses have been built since 1967 and “it was, until recently, common ground with Snowdonia National Park Authority that planning permission remained valid, and development continued”.

“We have worked with the authority to improve the scheme with discrete variations,” a Hillside spokesperson said.

“It needs to be emphasised that each variation was approved by the authority, and the authority specifically confirmed that it was acceptable to proceed in this way.

“The complete recent U-turn by the authority, where they threatened enforcement proceedings if any further works were carried out, was a surprising change of position and raises an important point of law, which is why the issue is now being determined by the Supreme Court.

“We have always emphasised our desire and willingness to work with the authority to deliver the best possible scheme here, which despite these proceedings remains our position. We have always worked to enhance the environment and economy of Aberdyfi, and hope to continue to do so.”

Snowdonia National Park said it would wait until the decision of the court before making a statement.