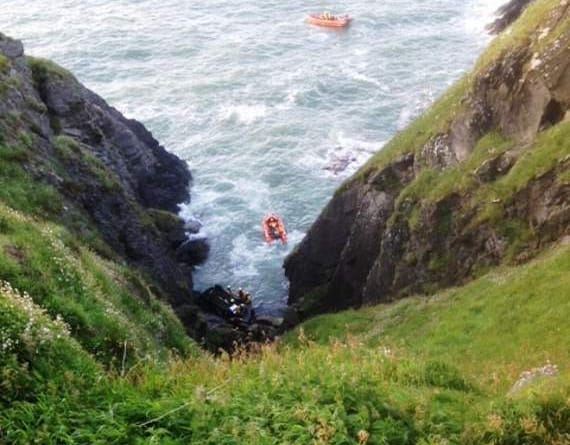 MWNT residents have spoken of their shock and sadness after a motorist plunged almost 100 feet to his death off a clifftop on Friday evening.

Congratulations to Ceredigion AS and A Level pupils

The driver of the vehicle – believed to have been a Freelander Landrover – died at the scene at around 7.50pm having apparently driven down a sloping field before ploughing through a fence bordering the coast path and careering over the cliff.The deceased was named this week by police as Gary Christopher Chilton, 42, from Manchester.Martin Evans, who owns nearby Ty Gwyn Caravan Park, confirmed that Mr Chilton had been staying on the campsite.“Although the gentleman himself was a stranger to me, he was part of a group who come here every year,” Mr Evans told the Cambrian News.“I know three of the boys and they’ve been coming here for a very long time. It’s such a terrible thing to have happened. To get to where he finally ended up he drove 150 yards across a field and then a further 20 or 30 yards to the cliff edge. It’s a very long drop at that point.”See this week's south editions for the full story, in shops and online now