Tarling back stronger than ever after spate of crashes 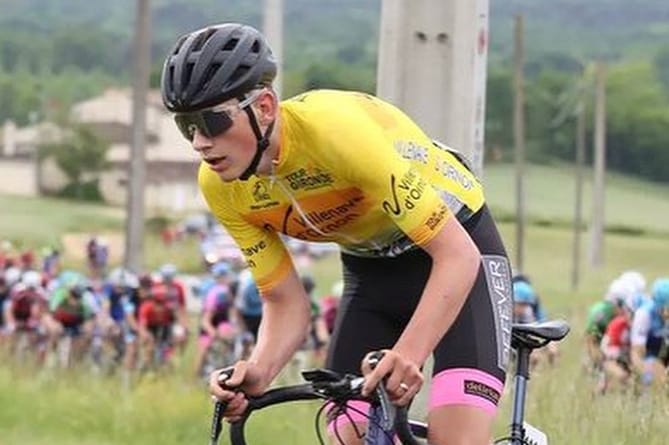 Ffosyffin junior cyclist Joshua Tarling has been enjoying success at home and abroad over recent weeks with a string of road race and time trial victories.

Following a spate of crashes at the beginning of the season leading to broken ribs, a cracked shoulder blade, road rash and a concussion, Josh has bounced back stronger than before with some notable wins.

Josh kicked off the purple patch in May with the two-day, three-stage Tour de Gironde based near Bordeaux. Held in sweltering heat Josh managed to win the stage 1 time trial by 32 seconds breaking the course record. He then set about defending that lead over the remaining two hard and fast stages that took most of the hills in the area. Surviving a mechanical on stage 2 and a crash-strewn stage 3 he took the overall win with the help of his Belgian FlandersColor teammates.

Next up was the even longer Grand Prix du Morbihan in Brittany where Josh would line up in the Nations Cup race for Great Britain. The opening stage was a long, hot 130km slog through the Brittany hills and Josh wasted no time in attacking off the front. Out solo for the first 100km he was eventually caught and finished in the bunch. Stage 2 was another Time Trial and this time Josh again won and broke the course record putting him into the overall lead. Unfortunately, an onslaught from lots of different teams resulted in a break going on the final stage and Josh dropping to 6th overall but winning the King of the Mountains, the Sprints, the Combine and the Attacking Rider jerseys along the way.

Magpies off to a flyer in season opener against Rhos Aelwyd

Llanilar and Machylleth off to flyers in Central Wales League South

Taking a break from overseas racing the next event was the Northwest Junior Tour. A two-day, three-stage event held around the hills of Lancashire and forming part of the National Junior Series. Again Josh managed to win the opening time trial and took the race lead into stage 2. Things initially didn’t go to plan with a puncture and slow wheel change meaning after just 11 miles Josh was 1:20 down on the leading bunch. However, an aggressive chase and an immediate counter attack saw Josh break clear solo and take the win on the stage by over two minutes. With everything controlled on the wet, hilly final stage Josh took the overall win.

Last up in this block was the Trofeo Saarland in Germany riding for Great Britain. This four-day, five-stage race was another tough race but Josh again managed to win the time trial and take the overall lead. A series of mechanicals and bud luck for the team resulted in him dropping out of the overall lead but another solid performance.

Josh’s attention now switches to the track with selection for the European Junior Track Championships and Commonwealth Games in the weeks ahead.