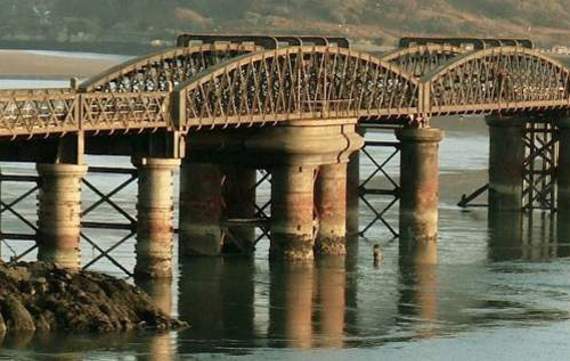 Barmouth Bridge, or Barmouth Viaduct is a Grade II* listed single-track wooden railway viaduct across the estuary of the Afon Mawddach

RESTORATION work on Barmouth Viaduct is to start later this month, signalling the beginning of three months of disruption for rail users and walkers.

The work, which is being carried out by Network Rail, will see the 150-year-old viaduct undergo a complete restoration “in a way that doesn’t threaten its industrial heritage and its Grade II listed status.”

During the closures, you will not be able to walk, cycle or get a train over the viaduct.

The first closure of the viaduct will be from 12 September until 12 December, with another closure planned for September 2022.

A spokesperson for Network Rail said: “To reduce the impact of our work, we’ve carefully planned for it to take place over three years, with three shorter full closures of the viaduct, rather than one longer full closure.

“Our colleagues at Transport for Wales will be providing rail replacement services during the closure between Pwllheli and Machynlleth stations, and all stations in between.

“There will also be an additional bus service for local school pupils to take them to and from school during the closure.”

The spokesperson added: “Our advice for passengers, pedestrians and cyclists is to plan ahead and allow additional time for travelling.

“We’ve worked closely with Cadw, Gwynedd County Council and other stakeholders over a number of years to develop and agree our plans.”