A chilling 'ghost story' for Halloween 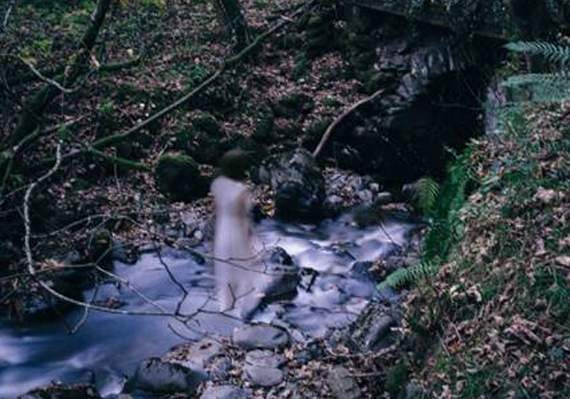 An eerie photograph has emerged of a ghostly figure hovering over a river at Hafod Estate near Aberystwyth — thought by locals to resemble one of the water spirits from an old Welsh legend, the Three Sisters of Plynlimon.

The chilling shot, which appears to reveal a dark-haired woman in a white dress, has caused quite a stir in the area.

Captured on the River Ystwyth, some believe that the figure resembles a water spirit from the local myth, in which three sisters journeyed from a mid Wales mountain to the sea, creating the River Ystwyth, Wye and Severn in their paths.

Nearby residents are speculating whether this apparition could have indeed been the water spirit of the River Ystwyth.

Dave Newnham, the estate manager who has worked at Hafod Estate for 10 years, photographed the spirit-like figure on the River Ystwyth when he was checking the footpaths before heading home for the evening.

Mr Newnham said: “I saw a blurred shadow in the corner of my eye and spotted a woman standing in the river near Dologau Bridge.

“I shouted out to her as it was a cold night and I thought she might be in trouble, but it wasn’t long before I realised she wasn’t a person at all.”

Mr Newnham managed to catch a photo of the woman before she seemed to disappear and merge into the river.

The tale of the Three Sisters of Plynlimon

High in the black mountains, on the windswept slopes of Mount Plynlimon, three sisters met to discuss the weighty problem of what was the best way to the sea - for, being water spirits, they were fond of the oceans.

The first decided to take the direct route and headed westward. She became the river Ystwyth and was the first to mingle with salty waters.

The second sister had a taste for landscape and made her way through purple hills and golden valleys - her name was Wye.

The remaining sister decided against shortcuts and it took her 180 miles to reach the sea.

The Severn, it appears, wished to visit all the fairest cities of the kingdom and never stray far from the haunts of men.