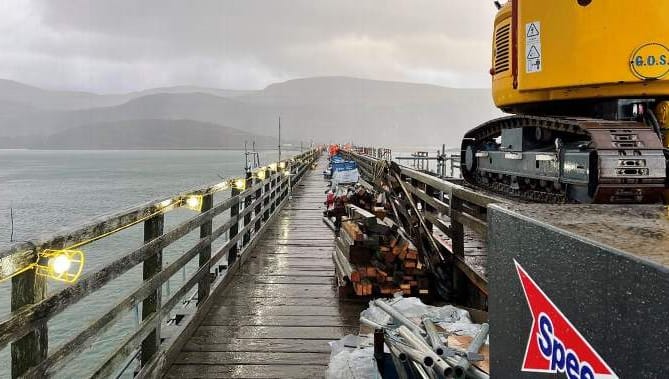 Engineers have discovered that the condition of the timber structure was worse than anticipated. Credit: Network Rail

TRAINS will not return to the Cambrian Coast line until at least the end of December after engineers discovered problems with the timber structure of Barmouth Viaduct.

Network Rail has this afternoon apologised to passengers and the local community as its £30 million restoration of Barmouth Viaduct is being extended after engineers found the condition of the timber structure was worse than anticipated.

The work to refurbish the Grade II* listed viaduct is the biggest and most ambitious in its history with the three-year programme scheduled to replace more than 1,000 timber and metal parts of the bridge, which are rotten and decaying.

The railway line between Machynlleth and Pwllheli was due to reopen on 12 December, but will now reopen on 29 December, 17 days later than planned, so engineers can safely carry out the additional repairs.

In a statement, Network Rail said: “As work has progressed this autumn, Network Rail engineers have had the opportunity to thoroughly examine the condition of the structure. Unfortunately, a number of additional timbers under the railway and the walkway have been found to need replacing due to deterioration.

“The viaduct will not be able to reopen while this vital work is carried out and is now planned to reopen to rail passengers on 29 December, assuming no further defects are found, and subject to extreme weather conditions which can cause delays when lifting machinery and cranes are needed.

“Network Rail is working closely with Transport for Wales as they make arrangements to provide rail replacement services during the extended closure of the railway.”

Gareth Yates, project manager at Network Rail, added: “We understand that this is disappointing and are very sorry for the inconvenience this extended closure of the railway and walkway will cause.

“The extent of the damage is far worse than we feared so we are extending this work now, when visitor numbers to Barmouth are lower and schools are going into Christmas holidays, to reduce disruption as much as possible.

“We will have engineers working around the clock to get the railway reopened.

“The work we are carrying out will ensure this iconic viaduct will continue to serve the community and visitors for many years to come.”