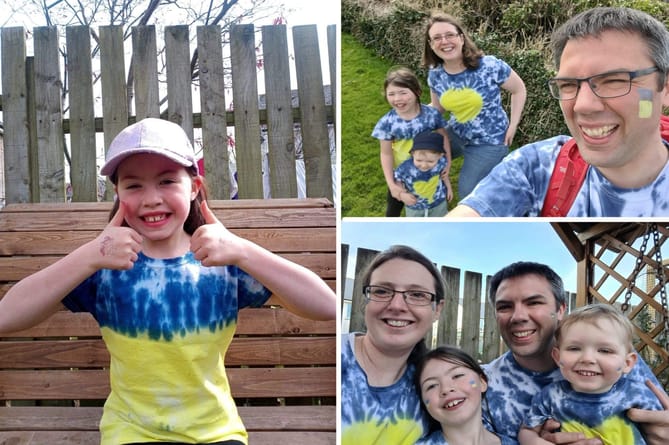 A SCHOOL girl from Penrhyncoch has raised over £1,000 for Ukraine by walking and cycling more than 40 miles across the Easter weekend.

When asked why it was that she wanted to raise money for the cause, Nia said: “I heard about Ukraine being attacked by Russia and I thought they might need more help because families have been separated.”

While for many the prospect of a 40 mile challenge is daunting, Nia explained that while some parts were difficult, she quite enjoyed the journey.

“Well it was easy on the bike going downhill but it was hard to go up hill on the bike. I made the cycling fun by making up a super Mario game. When we crossed the road we did a rainbow jump!”

With lots of rainbow jumps taking place over 40 miles, Nia’s friends are very proud of her,

She added: “They feel very happy! Some of them have given me money and joined me for walking too.”

Nia’s parents, Sian and Neil MacKintosh are very proud of their daughter’s achievement. Speaking to the Cambrian News, Sian said: “My husband Neil and I are incredibly proud of Nia.

“She was aware of the news reports regarding Ukraine, and her school were also raising money.

“She asked me if she could do something herself to raise money for the refugees, so I said we’d help her set up a fundraiser.

“In the end we decided to support her to achieve what she could, in the end, it tended to be that we had to make her stop at the end of most days as she was hoping to “feed another family if she walked just one more mile.”

“As the weekend progressed, achieving 40 miles was her idea. We are so proud of her kindness and perseverance.”

Sian added that none of this would have been possible without the support from the community.

“This fundraiser has been a success due not only to Nia’s achievement, but also thanks to the incredible support she received.

“It felt like the whole community got behind her, whether waving, hooting their horns, cheering her on, donating or joining us on the cycle/walks.

“We’d like to thank everyone who supported Nia, and especially Tymawr petrol station and Penrhyncoch post office for agreeing to have her collection boxes and posters to help raise awareness.

“A huge thanks to those that joined Nia to walk or cycle with her, it made the weekend so enjoyable.

“We are delighted to have raised over £1,000 money for the DEC, and hope it can now go to help those who have lost and suffered so much.”