Viaduct to close this Sunday for start of £30m restoration work 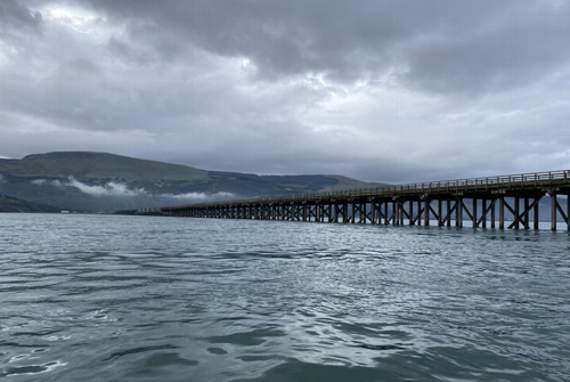 NETWORK Rail is reminding passengers that work to restore Barmouth Viaduct will restart this weekend.

The £30m restoration project has been carefully planned to avoid the busy summer months.

The viaduct will close completely, including the walkway, from this Sunday, 12 September, to Sunday, 12 December, to allow the work to be carried out safely.

The Grade II listed viaduct, the longest timber bridge in Britain has survived two world wars - including a near-miss with a live naval mine in 1946 - and a marine woodworm invasion in the 1980s.

But now, at over 150 years old, parts of the bridge are rotting and decaying.

In its biggest ever upgrade, Network Rail will replace more than 1,000 timber and metal elements of the viaduct as part of the £30m restoration.

Bill Kelly, Network Rail’s route director for Wales and Borders, said: “I’m delighted that so many visitors have returned to Barmouth this year to enjoy everything the town has to offer.

“We have carefully planned our £30 million restoration of Barmouth Viaduct so that most of our work takes place outside the peak summer season, but also avoiding the worst of the winter months when bad weather would make the work too challenging.

“The upgrade will allow us to continue to run a safe, reliable and efficient railway, and secure the future of Barmouth Bridge for years to come.”

Network Rail is carrying out additional work during the £30m restoration, including replacing all the timber main beams.

The upgrade has been designed to avoid changing the viaduct’s appearance, with the mechanism for the swing span remaining in place. The entire 820-metre length of track will also be replaced.

Network Rail has worked closely with Transport for Wales, Cadw, Gwynedd Council, local elected representatives and others over several years to develop plans to upgrade the bridge.

To reduce the impact of the work, it is taking place over three years, with three short closures of the 19th century viaduct, rather than one long closure.

Transport for Wales will provide rail replacement services during the closure and passengers are advised to check before travelling.

In 2022, Network Rail will replace the metallic spans of the viaduct and the associated track. They will also be upgrading the track at the north and south end of the viaduct.