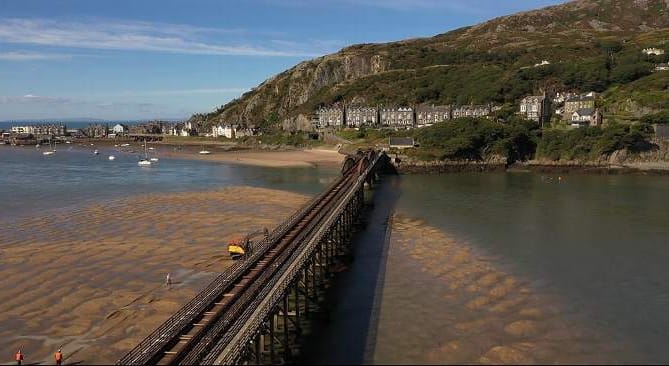 The viaduct will reopen on Christmas day until 9 January to allow pedestrians to use it over the Christmas period.

The Grade II listed Barmouth Viaduct has been undergoing a £30m restoration since September, but engineers found it to be in a much worse condition than anticipated.

The walkway will be open for the festive period but will close again on 10 January. It is expected to reopen in mid-February.

The railway works were extended by 17 days and are on track to complete on 29 December.

Gareth Yates, project manager at Network Rail, said: “I am delighted that, despite some horrendous weather conditions in the last month, we have made good progress and are on track to reopen the railway line on 29 December so that passengers can once again travel over this iconic viaduct.

“The people of Barmouth have been so supportive of our restoration work and we know how important the viaduct is to the local community, so we have worked around the clock to enable the walkway to be temporarily reopened during the festive period.

“The bridge was in a much worse condition than we expected, so we need to return in January to complete the necessary work on the walkway, but the railway will remain open during this time.

“Our £30m restoration will mean Barmouth Viaduct will be safer and more resilient to challenging weather conditions in the future.”

Dafydd Williams, Head of Environment for Gwynedd Council said: “Progress on this challenging project has been encouraging. The works have uncovered further unforeen issues that need attending to, and unfortunately this means that the walkway has to remain shut for a while longer in the new year.

“Whilst we recognise that this is not ideal, we are comforted that the thorough work will ensure that maintenance disruption will be kept to a minimum, in the future.”

The entire restoration involves replacing more than 1,000 timber and metal elements of the viaduct, which are rotting or decaying, as well as the entire 820m length of track. Network Rail is doing this on a ‘like for like’ basis to maintain the viaduct’s magnificent appearance.

Network Rail has worked closely with Cadw, Gwynedd County Council, Transport for Wales and others over several years to develop plans to upgrade the bridge. To reduce the impact of the work, it is taking place over three years, with three shorter closures of the 19th century viaduct, rather than one longer closure.

During 2022, Network Rail will replace the metallic spans of the viaduct and the associated track. They will also be upgrading the track at the north and south end of the viaduct in 2022. The bridge will be closed from Sunday, 11 September to Sunday, 11 December 2022.

Transport for Wales will be providing rail replacement services during the railway closure and passengers are advised to check before travelling.