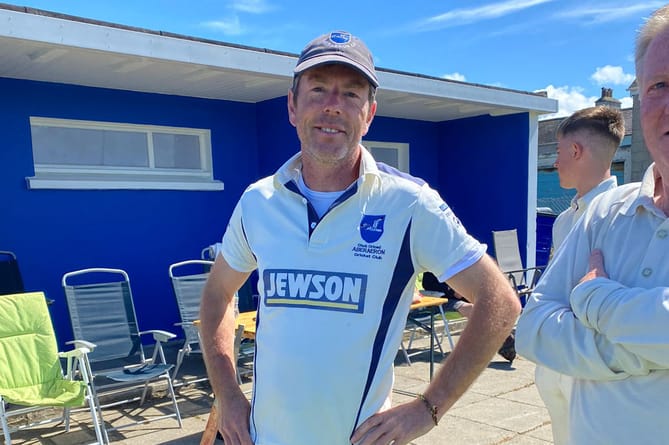 It was not a case of after the Lord Mayor’s show for Aberaeron at the Seaside ground, as the home team managed to hold on for a hard fought victory the day after their annual six a side festival.

Hywel Rees won the toss and, whilst club members were clearing the grounds and their heads, elected to have a bat. After 8 balls, this was looking like a questionable decision as first John Fice fell to a scoop off the hips that went to the square leg fielder and was held by young Joel Eynon and then, two balls later, Pat Cullen nicked to first slip where Joe Williamson took an excellent low catch off his brother Jack’s bowling.

Jacob Jenkinson and Hywel Rees took on the task of rebuilding the innings after these early setbacks and were ticking along nicely as the team score passed 50. Captain Jack Williamson decided to take himself and Joe off after the 8 over batting powerplay and brought on Sam Williams first change to bowl his left arm spinners in tandem with Joel Eynon. Despite some excellent variations from Sam, the Aberaeron pair were able to pick off boundaries and singles. It was variation though that did for Jacob in the end as, having fired through several straighter skiddier ones, Sam tossed one up a bit more and gave it a bit more rip. The ball turned and just caught a feather on its way through to wicketkeeper Dylan Williams’ gloves. Jenkinson made an accomplished 33 and was a big scalp for Tywyn.

Sam struck again in his next over, to remove Kevin Regan, caught by Ed Hughes off a skied top edge, and suddenly Aberaeron were struggling at 67-4. Their cause was not helped by losing their captain not much later, a fine edge off Matthew Maslin’s bowling held onto by Dylan Williams behind the stumps.

With Aberaeron 5 down for 83 runs, there were shades of last week’s collapse against Talybont however, perhaps inspired by England’s Bazball approach or just because he always plays that way, Jamie Davies decided to counter-attack. A series of huge hits, from ball one, provided first-class entertainment to the watching crowd as balls flew to the boundary. Jamie rode his luck to some extent as one catch was held by Jack Williamson as he fell over the rope and another was taken just over the boundary but the reward was that Tywyn spread the field and went on the defensive, having held the ascendancy.

At the other end, Alex Pitchford also experienced some good fortune early on in his innings, hanging slightly on the back foot and slashing between backward point and gully to score his runs. Two chances went begging in this region and a mistimed drive off Sam Williams also went down at extra cover. Despite those chances, Alex started to find his timing and get his feet moving and slowly grew into his innings. The combination of Jamie’s onslaught and the dropped catches appeared to suck some of the belief out of the Tywyn players as heads dropped slightly and the runs started to pile up.

Sam Williams possibly suffered the most, with chance after chance missed off his bowling and Jamie cashing in with four sixes. Figures of 2-21 off 4 became 2-62 off 8 and the momentum was with Aberaeron. Jack Williamson brought himself back on to attempt to regain some control after drinks and succeeded in beating another big swing from Jamie to bowl him for 35 off just 12 deliveries, a strike rate of nearly 300!

Dave Floyd joined Alex Pitchford and was happy to see out the Jack and Joe Williamson, both brothers giving little away in their second spells. The reward for this patience was an opportunity to attack in the final overs and both Alex and Dave did so with gusto. Alex in particular produced some scintillating shots, lofted straight drives, back foot cover drives, pulls to the leg side boundary including a soaring six. Floydy wasn’t quite finding the middle with as much regularity but quick running and good placement meant that he never got bogged down and kept the strike rotating.

Alex eventually fell for 82, his highest score for Aberaeron, going back to a ball which kept slightly low from Matthew Maslin and swinging over the top of it to be bowled. It was an innings that grew and grew, eventually blossoming into a match winning effort that was loudly applauded by his teammates.

Simon Mitchell came in for the final few overs and together with Dave took the Aberaeron past the 250 mark in confident fashion, Aberaeron closing on 260/7.

The players enjoyed another delicious tea provided by Tafarn y Cadwgan and enjoyed the break in the sunshine to reflect on the events of the day before at the 6 a side and the match at hand and Pitchford’s innings. The consensus was that although 260 was a big total, the astro and the fast outfield meant that it was perhaps only slightly above par and that a good bowling performance would be needed to defend it.

Tywyn opened the batting with wicketkeeper Dylan Williams, who had been impressive with the gloves and Dave Jenkins. They received little to score off from Hywel Rees and Simon Mitchell in the first 8 overs, with only the respite of some extras from Simon’s extra pace taking the run rate up to 4 an over. Having started the chase needing to score at 6.5, this was perhaps not the ideal start but Aberaeron were sharp in the field and cut off many scoring opportunities. The pressure eventually told as Dave Jenkins looked to attack the first ball from spinner Morgan Ashton’s first over. Going back and swivelling around to attempt a pull to backward square leg, the ball skidded on low and struck Jenkins in front of the stumps, out LBW for 6.

If JamieDavies’ attack with the bat had set the tone for Aberaeron’s come back in this match, Morgan and Hywel’s eight over burst together did the same for the defence of the total. 19 runs came from those 8 overs and after 16 Tywyn were 52-1 and the required run rate had crept up over 8.5. By drinks Tywyn had got to 80-1 but captain Jack Williamson was showing a lot of faith in his middle order’s ability to accelerate in the final ten as Tywyn seemed content to tick along taking few risks and picking off 1s and 2s with the occasional boundary.

Ifan Rishko eventually removed the obdurate Dylan Williams for a chanceless 40, with a fine delivery that cut in and smashed into the stumps. This brought Joe Williamson out to join his brother and at 95-2 with 16 overs to score 166 runs they needed to accelerate rapidly to stand a chance of winning the game. Some tight bowling, barring extras conceded, stifled the pair though and the pressure to get the scoreboard ticking over told as Joe dropped a ball into the off side and called Jack through for a single. Kevin Regan was the bowler and he capped off an impressive fielding performance by running across to gather the ball, turn and throw down the stumps to run out Jack by a metre.

Sam Williams came out to join Joe with the score on 100 in the 26th over and despite the ever increasing run rate appeared to be calm in the belief that he could bring his team home in the last 10 if they could get within 100.

Aberaeron were becoming slightly ragged with their lines and as the extras mounted up, Tywyn reached the 30th over requiring an unlikely 113 to win from the final 10. Their task became even more difficult in the next over as Kevin Regan struck with the final ball of his four over spell, a full dipping, swinging delivery hitting the base of Joe’s off stump on the full to bowl him for 7. 1-20 for Regan with a run out effected too.

It fell to Matthew Maslin to help Sam Williams manage the chase and give Tywyn a hope of victory. Maslin was accumulating cannily, finding gaps to drop into for quick singles to give Sam the strike but it was boundaries that Tywyn needed at this stage. The required run rate had just crept up to 15 when Simon Mitchell returned to bowl out his remaining overs in tandem with Jacob Jenkinson. Williams chose this moment to launch his counter-attack and plundered 15 runs off Simon’s 5th over including a delectable drive over extra cover for 6.

Simon struck back in his next over to bowl Maslin, defeating him with sheer pace, but Sam Williams continued to threaten to take the game deep - two identical straight drives for 6 off Jenkinson contributing to another 15 run over and then more extras and quick running delivering 10 off Mitchell’s next one to take Tywyn past 200 and gain maximum batting points.

Jenkinson knew that one more big over and the pressure would really be on the bowlers and delivered the perfect response - first trapping Sam LBW for an impressive 71 and then, two balls later, running to short cover to catch the slashing Ellis Melia for 0 off his own bowling. The fact that Sam had kept the game in the balance up to the 38th over was a testament to his batting but with his departure the pressure was off and Tywyn were happy to have a swing and enjoy the last two overs. Ed Hughes attempted to dance down the track and launch Jacob over his head in his next over but missed to give Dave Floyd a simple stumping and Jenkinson figures of 3-28 from his 5 overs.

Simon Mitchell attempted to knock over the last two Tywyn batters to garner maximum bowling points but was unable to beat the experienced Simon Jenkins or the young Joel Eynon. Tywyn closed on 217/8. The result was a big relief for Aberaeron, who were under massive pressure earlier in the day due to the impressive opening bowling from Tywyn, and then again when Tywyn were accelerating their scoring in the last 10 overs. That Tywyn were not in a position to chase down the total was down to the 8 over spells of Hywel Rees (0 for 19) and Morgan Ashton (1 for 32).

A 43 run victory for Aberaeron against a side that had been challenging for top spot in the table was a very handy result for them. It leaves Aberaeron in fourth position in the league but they will hope to take confidence from their performance in the field and can rest in the knowledge that this win was achieved without their top scoring batsmen of the season so far - Ted Trewella - and last year’s batting hero Steff Rees. In their absence, Alex Pitchford stepped up to the plate and delivered a match winning performance to take man of the match.