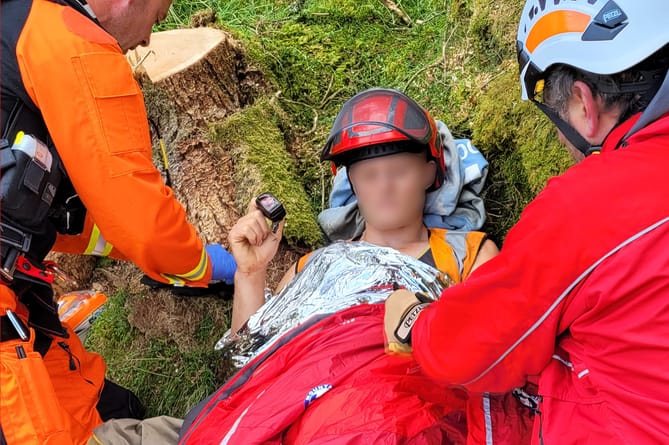 A FORESTER had to be airlifted to hospital after breaking his leg whilst working near Corris on Tuesday.

Shortly after 3pm. on Tuesday 31 May, call handlers from Aberdyfi Search & Rescue Team were made aware of a 20-year-old forestry worker with a reported ankle injury on steep ground above Aberllefenni, near Corris.

The man had stepped into a gap between rocks, but had then lost his balance and fallen awkwardly, breaking both bones in his lower leg.

A spokesperson for Aberdyfi Search and Rescue said: “The nature of the terrain, steep and rocky with a covering of felling waste, made movement very difficult, and a stretcher evacuation would have been hazardous and prolonged.

“With this in mind, assistance from the Coastguard Helicopter, Rescue 936, was requested by the first team volunteers on scene.

“Team casualty carers, along with the winchman paramedic, stabilised the casualty and got him ready for evacuation.

“He was winched aboard the aircraft and flown to Ysbyty Gwynedd for further treatment.

“Everyone was safely off the hill by 7pm.”