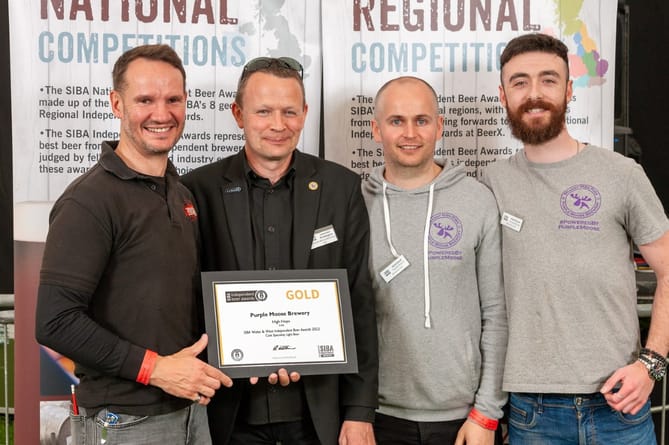 Purple Moose Brewery took home the gold at the awards, which took place at Ludlow Spring Festival in Ludlow Castle.

Navigator, which was awarded Silver Overall Champion of the Cask Competition, along with Gold in the Cask IPA Category is described as a Red IPA that delivers a balance between sweetness and bitterness that will send your taste buds on a journey.

High Hops, which was awarded Gold in the Speciality Light Beer Category is described as a full-bodied and refreshing hazy, pale tropical IPA. Enticing mango and passion fruit aromas draw the drinker in to the satisfying full flavours of mango, grapefruit and lime, finishing with lingering zesty tropical fruits.

Roy Allkin, SIBA chairman said: “The judges had a tough job separating the pack as the standard was extremely high once again.

“Lucky attendees of the Ludlow Spring Festival were able to try this and other award-winning beers immediately after the competition, something which is great for brewers too as they get to put their beers into the hands of real beer-lovers.

“The winners from the SIBA competition are officially the best independent craft beers in the Wales & West region, something brewers should be extremely proud of.”

Lawrence Washington from Purple Moose Brewery had this to say on their win.

“This is a fantastic achievement by the whole team at Purple Moose Brewery.

“For our two newest beers to each win gold in their category, and one of them reach silver overall, is a huge vote of confidence in the two beers we’ve developed.

“We have tapped into two beer styles here that are not typically mainstream British beers, but our brewery team felt passionately that we could bring something new to our range that really satisfies the senses.