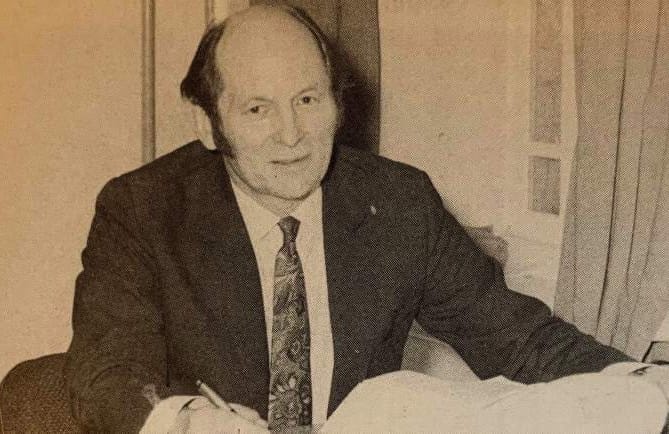 The life of a disability rights pioneer from Gwynedd is remembered today, on what would have been his 102nd birthday.

Robert Gwynn Davies, founder of Antur Waunfawr’s founder would have been 102 today, was spurred on by personal circumstances to transform people’s perception of the role of individuals with learning disabilities in society.

Born in Waunfawr, Davies attended the village school there before moving on to the county school in Caernarfon.

He then enjoyed a successful career in law before working in local government. Later he became the Justices Clerk of Bangor, Conwy, Llandudno and Betws y Coed.

Whilst training to become a lawyer, Davies registered himself as a conscientious objector in World War II and was forced to work the land at Garreg Fawr farm in Waunfawr.

Gwynn was also an integral part of the efforts to establish Ysgol Pendalar, a school for children with additional educational needs in Caernarfon. Furthermore, he worked with the North Wales Advocacy and Advice Service and acted as Director of SCOVO (now Learning Disability Wales).

A year after retiring early in 1983 to work for the Mental Health Commission, Antur Waunfawr was officially registered on 22 June 1984. It remains a progressive social enterprise offering employment, training, wellbeing, and volunteering opportunities to those with learning difficulties.

The enterprise set up shop at Bryn Pistyl, a former village shop that was run by Davies’ family.

On what would have been his 102nd birthday, Menna Jones, Chief Executive of Antur Waunfawr, has paid tribute to Gwynn Davies’ "far reaching" vision.

“Gwynn’s legacy is an incredible one,” she said.

“He was a doer, he did things, and he practised that philosophy throughout his life.

“Driven by personal circumstances, he revolutionised the way we think about the role of individuals with learning disabilities in society.

“His radical and far-reaching vision continues to have a positive impact on the lives of the area, nearly 40 years after Antur Waunfawr was established.”

Davies’ was known as a well-rounded individual, making time for plenty of hobbies such as winemaking, golfing, making furniture, keeping chickens, painting, and the ancient Welsh art of cynghanedd.

Davies received recognition of his work during his life and was ordained to the white robes at the Cwm Rhymni National Eisteddfod in 1990. He was also offered an OBE in the 1989 New Year Honours List, but he rejected the offer.