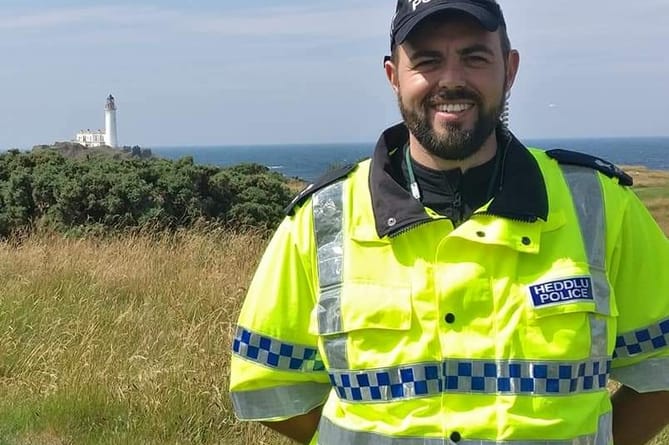 North Wales Police, the RSPCA, Natural Resources Wales, the North Wales Wildlife Trust and other Welsh police forces have entered the second day of Operation Seabird, a national campaign which aims to engage and educate people about the sensitivities of the coastline, and how simple changes in behaviour could reduce pressure on our unique wildlife.

Locals and visitors to north Wales know how beautiful the coastline is, especially during the spring and summer months. Because of this, north Wales attracts hundreds of tourists every year, many of whom may not be aware of the impact they can have on coastal wildlife in the area. The high tourist attraction to the area also increases recreational activities such as boating, kayaking, paddleboarding and more, which has the potential to disturb wildlife if not conducted in a safe and responsible manner.

Sergeant Liam Jones of the North Wales Police Rural Crime Team said: “Op Seabird Cymru seeks to engage key partners to work with the police throughout Wales to educate those people who use our coastal areas and seas and to enable them to enjoy our wildlife safely and without disturbance. Over the years we have seen an increase in people using our coastal areas and being unaware of the effect that they can have on coastal birds and mammals if they act irresponsibly. A disturbance can have a devastating effect on certain species and their habitats and with simple education and engagement we can help prevent it from happening.”

Vessel collisions often result in physical trauma or death of marine wildlife. Marine mammals can often be hard to spot in the water; motorised vessels travelling at speed risk disturbance and injury to whales, dolphins and seals through collision. Similarly, some seabirds are at risk of collision from fast-moving watercraft, particularly auk species. Later in the breeding season, many juvenile seabirds can be found in small groups around the cliffs and out into the North Sea. These birds cannot fly and so cannot move out of the path of fast-moving vessels, increasing the risk of collision between these birds and watercraft. Collisions are most common where activities involve motorised watercraft that can travel at speed.

Excess noise can disturb wildlife causing detectable changes in behaviour. It can also interfere with an animal’s ability to communicate, navigate, avoid danger, and find food, ultimately impacting the health and survival of many marine species. For marine mammals sound is their primary means of communication and noise from motorised vessels has the potential to disrupt their normal behaviours and negatively impact their health and wellbeing.

Seabirds nesting on cliffs are often startled by noise causing changes in behaviour such as fleeing their nests and leaving chicks and eggs vulnerable to predation and adverse conditions. This is especially problematic for auk species (guillemots and razorbills) as they do not build nests and lay their eggs directly onto ledges along the cliff; if an auk is startled, there is a significant risk of their egg falling from the cliff. Equally, a significant disturbance event can cause juvenile birds to leave the nest before they are ready to fledge, significantly reducing their chances of survival. Noise disturbance is most common in motorised watercraft-based activities however it can be caused by any loud noise near marine wildlife.

There is evidence that marine animals negatively change their behaviour in the presence of human activity. Any activity has the potential to cause visual disturbance and can cause distress, reduced resting time and avoidance or aggression behaviours in wildlife. The effects of visual disturbance on seabirds can be similar to that of noise disturbance; unfamiliar sights can cause nesting seabirds to be startled, forcing them to leave their nests leaving chicks and eggs vulnerable to predation and adverse conditions.

Visual disturbance can also cause problems for animals who venture onto land. Seals ‘haul-out’ onto land between foraging trips to rest and nurse their young. Recreational activity close to a group of seals on land can startle them, causing them to return to the water. Disturbing seals that are ‘hauled out’ risks interrupting nursing and mating as well as risking separating young from their mothers. Visual disturbance has the potential to be caused by any activity taking place around marine wildlife, even those activities that are not usually thought of as causing disturbance such as paddle boarding and kayaking.

As well as educating and raising awareness through social media channels and local media, North Wales Police will be working with partner agencies such as the RSPCA, Natural Resources Wales and North Wales Wildlife Trust to hold “action days” throughout the summer months. These action days will see uniformed officers at launch sites and around the north Wales coast. They will visit businesses, educate and engage with the public to raise awareness of the problems some recreational activities can cause to our coastline wildlife.

“If you’re out and about along the coast, we’re asking you to remember that any activity has the potential to cause disturbance to wildlife, if not conducted in a responsible and safe manner,” a police spokesperson said.

To reduce disturbance to sensitive wildlife whilst on the water, we advise the following:

• Keep your distance: Keep a safe distance (at least 100m) from the cliffs, rafting seabirds and marine mammals, allowing space for animals to move away from you.

• No-wake speed: Motorised vessels and personal watercraft should travel at a no-wake speed within 300m of the cliffs or shore.

• Avoid enclosed spaces: All motorised and non-motorised vessels should avoid entering caves and travelling through archways where breeding seabirds or resting seals are present.

• Be aware: If an animal’s behaviour changes in response to your presence, move away quickly and quietly.

“If you do see someone causing a significant disturbance to wildlife along the coastline, we are encouraging you to engage with any police or environment agencies at the locations, or report it to us via 101 or through our online webchat facility,” the spokesperson added.

You can keep up to date with all the work we, and other partner agencies are doing by following #OperationSeabirdCymru on social media.