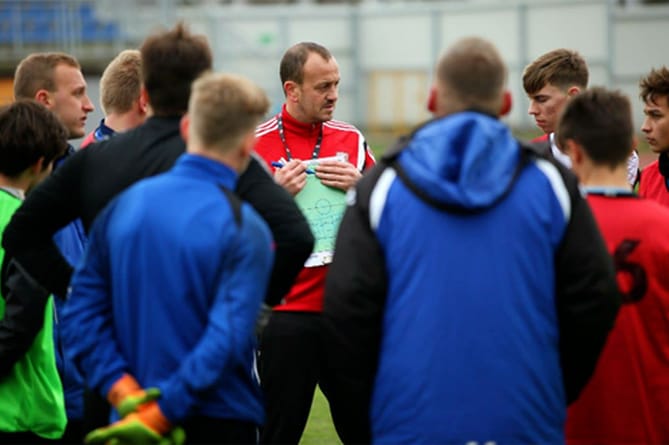 Most recently working as assistant manager and head of coaching at fellow JD Cymru Premier side Cardiff Met University, Williams boasts an extensive CV on and off the pitch.

Hailing from Maesteg, the former goalkeeper enjoyed a long career in the Football League as well as receiving international honours, making 17 caps for Wales U21 between 1996-2000 – including a matchup with Italy’s U21 side where he saved two first-half penalties from future World Cup winner and football icon Andrea Pirlo!

Working under such names as Kenny Dalglish, Roy Hodgson, and Chris Coleman, the 44-year-old made 292 senior appearances with 10 clubs over a 15-year career, the majority of which with Hartlepool Town (142), Grimsby Town (50) and Wrexham (38).

He began his coaching career during his playing days, becoming goalkeeper coach at Grimsby Town and Carlisle United before taking the same role with the Football Association of Wales (FAW) at U17, U19 & U21 level, and with Bury FC following retirement.

Between 2013 to 2014, Williams took the role of assistant manager at Crawley Town and Portsmouth before moving into scouting, gaining experience as an opposition scout with Leyton Orient and MK Dons before almost three years with Stoke City as a recruitment scout for the 17-21 age group.

It was during this time that he took on roles with the FAW as a UEFA B Licence and B Goalkeeping Licence Coach Educator, and as head coach with UK Football Trials – roles he continues to hold.

In 2017, he became an associate football tutor at Cardiff Met University and assistant manager of Cardiff Met FC – alongside former Seasider Dr Christian Edwards – playing an instrumental role in achieving Europa League qualification with The Archers in 2018/19.

In 2019, he was appointed head of coaching and thereafter held all three roles with the university for three seasons, responsible for designing and implementing academy curriculums alongside his senior team roles.

He graduated with a Master’s Degree from Cardiff Met University in Sports Coaching Pedagogy in 2021 and was successful in attaining his UEFA Pro Licence – doing so alongside current ATFC head of coaching and youth and ATFC Women’s manager, Gavin Allen.

Club chairman Donald Kane said: “After a lengthy process, we are very happy that Anthony has agreed to join us. His CV speaks for itself, demonstrating a wealth of experience across many aspects of the game.

“We now look forward to supporting him in every way possible to build on the work done last year with a young and committed squad.”

Williams said: “I’m delighted to have been given the opportunity to manage such a prestigious club.

“Having been involved in the league for a number of years, I’ve always admired the passion and dedication shown by the club’s loyal supporters. It’s clear that the local community is at the heart of everything it strives to achieve.

“I would like to take the opportunity to thank everyone associated with Cardiff Met – it was a privilege to have spent the last five years at the club.”