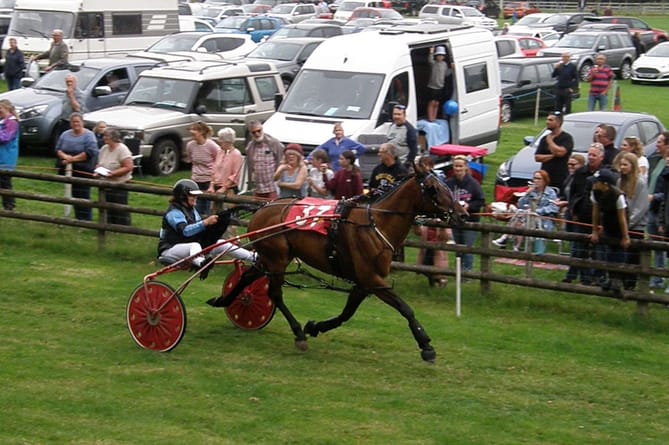 Penybont races has always been the highlight of the trotting season and as the event enters its second century of racing it continues to thrive. Last year the decision was taken to change from a midweek meeting to a Saturday fixture and this year’s event showed a revival to its illustrious past.

The meeting began with the Nursery race where Woodstone Miranda, the talented but somewhat erratic mare owned and driven by Austin Hughes from New Radnor, was first past the post from the young Red Cash Sargeant, Newbridge and the improving Sally M (Davies, Ludlow).

The Novice heats were next on the card with the first won by newly promoted Blackfield Okydoki driven by Mathew Tromans for the Weigel family from Llanddewi Velfrey. In second was Lanehouse Girl (Lewis, Llanbister) while Olympics (Mills, Llanddewi) was third. The second Novice heat saw a canny drive by Oliver (OJ) Jones on Greenhill Gus to win for the owners, the Dowse family from Aberystwyth, while Victoria Penlan (Thomas, Bridgend) was second and Bethany (Weigel, Llanddewi Velfrey) had third.

In the first of the Grade B heats the inform Collingwood stable from Huntington again scored, as Lee Price guided Llwyns Mercy home in front of the stylish Kentucky Roam (Perks, Presteigne) with Halfpenny (Lloyd, New Radnor) in third. Beg For Mercy with owner Mathew Tromans from Newcastle Emlyn took the second Grade B heat in front of the reliable Whiskyandwater (Morgan, Knighton) while the other Collingwood entry Luminite was third.

The Penybont Grade A race is the pinnacle of the trotting season and despite it being a straight race it was still one of the classics. Last year’s winner Ontop Shouder Cuda owned by Jayne Bevan from Llanddewi retained their crown as this phenomenal horse, driven by Lynne Boxhall, swept from the back to claim victory from the talented mare Second Affair (Perks, Presteigne) while Dernol Yankee (Wozencraft, Llangurig) claimed third.

The two Baby Novice races followed with Carrie on Fred going one better than last week to win with his owner Liam Middleton from Llandrindod at the controls, in second was the improving Ithon Papa (Rowlands, Rhayader) while newly promoted Blackberry (Williams, Llanafan) was third. Easy Connection with Ben Flanagan driving for new owners the Chetter family from Cannock secured their first win, in the second Baby Novice ahead of Dernol Ebony (Staples, Merthyr) with Ithon Prince (Duggan, Howey) in third.

For the first saddle trot of the season sadly there were only two runners, but Jayne Bevan from Llanddewi, on the fantastic horse she owns and trains, Ontop Shouder Cuda provided a racing demonstration to win in front of No Stoppin belonging to the Greenway family from Michaelchurch Eskley.

The dash was the next on the card and this probably provided the closest finish of the afternoon with three horses on the winning line together. The verdict went to Lawless owned by the Elder family from Blaencelyn and driven this week by Oliver (OJ) Jones. Inches away in second was Lakeview Meg (Lewis, Llanbister) with Howdya Likemenow (Havard, Dinmore) close behind in third. Lawless now moves up into open racing.

The Novice final was another fascinating race, with Blackfield Okydoki driven by Mathew Tromans for the Weigel family from Llanddewi Velfrey claimed the prize from long time leader Greenhill Gus (Dowse, Aberystwyth) with Victoria Penlan (Thomas, Bridgend) in third.

In the Grade B final the little staying mare Llwyns Mercy provided an ecstatic run for the Collingwood stable from Huntington, driven by her breeder Lee Price to win, from the fast finishing Whiskyandwater (Morgan, Knighton) with the long time leader, Beg For Mercy (Tromans, Newcastle Emlyn) in third.

The final race of the day has been part of Penybont races from the very beginning, the longer distance of one and a half miles providing an unusual test for Standardbreds these days.

There were plenty in with a chance, but it was the super-sonic Second Affair (Perks, Presteigne) driven by son in law Oliver (OJ) Jones from Evenjobb who crossed the finishing line in front. This victory secured Oliver as the leading driver of the day. In second place was Alibis Dream (Lloyd, Gladestry) with Blythview JJ (Pike, Merthyr) in third.

Racing returns to Ceredigion and the popular Talsarn meeting on Saturday, 6 August starting at 1.30pm.

One & a half mile