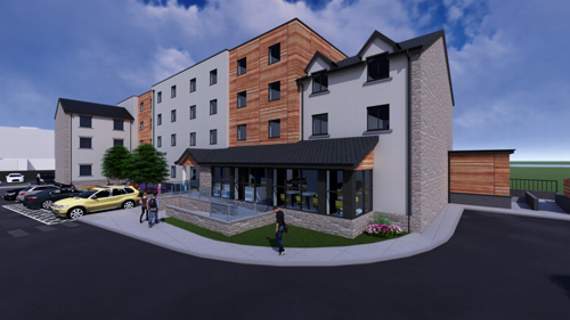 The design of a new hotel in Porthmadog has been criticised by some members of the public.

Ty Moelwyn on Britannia Terrace is being demolished to make way for a new 80-bedroom Premier Inn. Its design has been welcomed by some, but not all.

The building, near the town’s harbour, once housed the Government’s only Welsh-speaking tax office.

Steve Poole from Leatherhead, Surrey, was a regular visitor to the town before lockdown restrictions.

He believes the new building is “worse” than the demolished tax office.

He said: “I think it’s fair to say that most people don’t like the design.

“Someone compared it to a prison-style building which I agree with.

“This would have been a wonderful opportunity to build something really special that complements the surroundings and the stunning landscape beyond. Instead, they have allowed a carbuncle which is worse than the one it is replacing.

“It’s not the first horrible concrete brutalist building in Porthmadog but this is a smack in the eye at possibly the most iconic part of Porthmadog, by the amazing railway and the Cob.

“They could at least have made the front nice!

“I’m presuming this was put out for public consultation but I don’t understand why residents didn’t object.

“I am a regular visitor to the area in normal times. The very least they could do is put some fast-growing trees in front of it.”

A Dyffryn Ardudwy resident who wishes to remain anonymous believes the building of a hotel is a functional replacement of the old tax office.

He said: “The old building was an eyesore that did little to support the community.

“This development could have been more in keeping with the local architectural context.

“But it’s a reasonable compromise between form and function.

“Fundamentally we need investment in tourism that leads to decent jobs with decent conditions.”

Phillip Morris, managing director of Liberty Properties, the group behind the design of the Premier Inn, said: “Everyone is of course entitled to their own opinion upon such matters.

“However, in this instance we liaised closely with both council members and officers and undertook a full consultation exercise.

“We are very proud that after six years of work we have managed to bring this £7.5 million investment to Porthmadog to provide much needed jobs and hotel accommodation for visitors.

“No one should underestimate the challenges of marrying operational and statutory requirements then producing a viable scheme in one of the most challenging economic climates seen in recent times.

“As for the proposed building, the elevations will feature a mixture of stone, slate, wood and render, so for this ‘visitor’ to label it a ‘concrete brutalist building’ is ill-informed at best.

“It is always so much easier to criticise than to create.